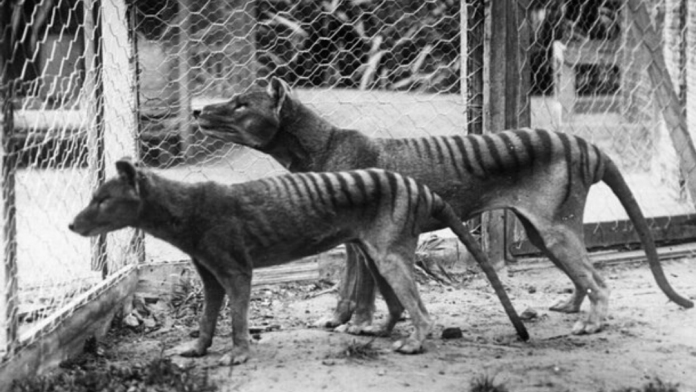 Just when we thought the hit Netflix series Tiger King couldn’t get any better, the star Jeff Lewis has now made some wild claims about the extinct Tasmanian Tiger! With the last confirmed sighting of the thylacine more than 80 years ago, he believes there’s still a chance they may still roam free.

The big cat star recently spoke to a local Hobart radio station and claimed there was ‘credible footage’ that the mysterious Tasmanian Tiger was still alive.

“’I think it’s possible [Tasmanian Tigers exist] and I think it would be cool to find one,” he said.

Jeff’s outlandish claims coincide with recently uncovered archival footage showing the last-known Tasmanian tiger roaming it’s enclosure at Hobart’s Beaumaris Zoo in 1935. The footage was uncovered by a group of thylacine enthusiasts, who were hunting through National Film and Sound Archive footage.

This 21 second clip, which hadn’t seen the light of day for 85 years, comes from an old travelogue called Tasmania The Wonderland.

It’s believed this thylacine, otherwise known as Benjamin, died in 1936 after developing a cold. But, according to Jeff, Benjamin wasn’t the last Tasmanian Tiger to roam the Earth.

So next time you’re in the Tasmanian wilderness, keep your eyes peeled, because who knows what you might find! Remember, if you’re heading outside, you’ll need to rug up and keep warm! Check out our recommended options to keep you toasty while you’re looking for the elusive Tasmanian Tiger.

Festival of Voices returns in 2022

A fond farewell to Falls Festival in Tasmania

What do you want to do?

In The Hanging Garden

Festival of Voices returns in 2022

Escape to these Ultimate Outdoor Swimming Holes in Tasmania

Your Ultimate Guide on How to Travel Tasmania Without a Car

6 Epic Mountain Walks in Tasmania for You to Try

ABOUT US
Playnia is your Tassie culture guide, bringing you the best cafes, bars and travel tips.
Contact us: contact@playnia.com
FOLLOW US
© Playnia 2020